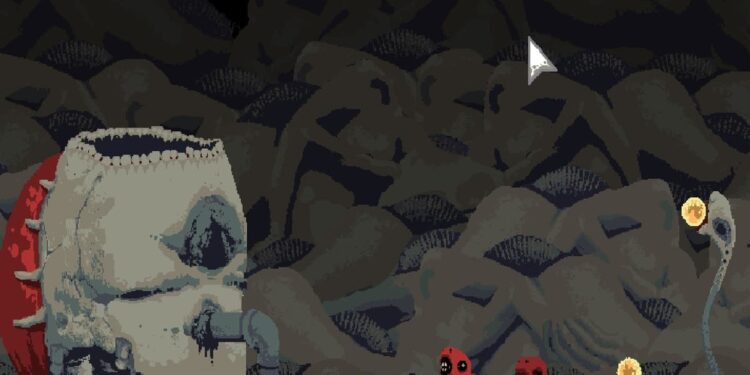 Pit of Babel has its inspiration from the Tower of Babel which is a Biblical myth. According to the story, people speak different languages because they were trying to build a tower to reach the heavens. God then makes people speak different languages so that they cannot understand each other anymore and scatters them around the world. Although there are many ancient sights where there were tall towers to reach heaven, the Tower of Babel is found its place in the Bible, and now there is a game about it.

Pit of Babel takes you on an interesting journey to build a tower. You won’t see different people speaking different languages though. What you’ll see are reddish monsters that eat some sort of bread that come out from plants and multiply. Since they have a big use, we’ll just call them pets. You put them in a grinder-like object and it produces objects to build the tower. The objects will look very familiar as they are the same as Tetris blocks.

The game is simple enough as you are sacrificing small red pets to get blocks to build your tower. It isn’t all that easy though. There are a lot of things to watch out for such as blocks moving as you build them and monsters appearing that will eat your red pets.

Things like this make it very challenging to go back and forth between the tower and the production line of the blocks. If you’re not careful enough, you might lose all of your pets and this will result in losing the game entirely.

The main goal is to build as far as you can until the game ends on the sixth floor. After you reach the sixth floor, you will beat the game entirely. In one session, it takes about one to two hours to finish the game completely but since there are a lot of things to watch out for there is a quite bit of a learning curve.

Note: There is no save feature so it’s best to beat the game in one session.

Pit of Babel is completely free to play. You can get the game for free but it’s only available on Microsoft Windows, like most other indie games that come out from Itch IO. Pit of Babel will also not take too much of your disk space as it’s very light at only 50 MB or so.

Get Pit of Babel for free. If you like the game, you can also donate to contribute to the work of Maceo bob Mair and Scottie Supple.

Should I get Pit of Babel?

This indie title may not be for everyone, especially if you’re someone that doesn’t really care about the storyline of the games. It also takes quite a bit of reading to understand what’s going to entirely.

You’re presented with a few pages of letters every time you reach a higher floor with your tower. Not reading them will not contribute to your enjoyment since the nature of the game is very simple and there isn’t anything else you can do in Pit of Babel. So if you’re not going to be bothered with learning more about the story of the game, know that it’s going to be an interesting experience.

The bottom line is if you’re not bothered with doing some reading while playing, Pit of Babel will be an exceptional addition to your indie games collection.