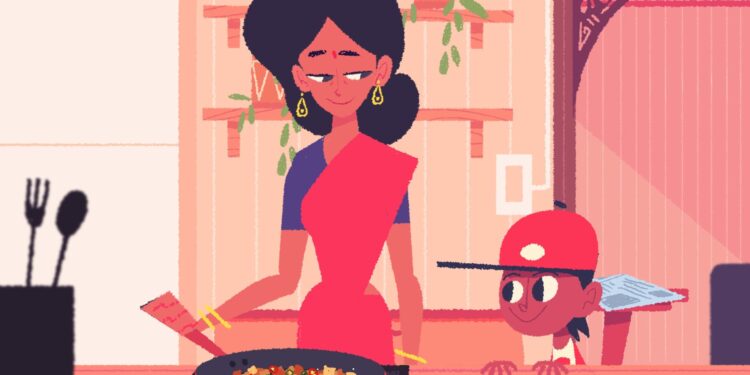 Do you like food? We guess you do. Despite keeping you alive, the taste of a delicious cheesecake or brownie is nothing but happiness. Well, what about indie video games? Do you like them? If you are reading these lines on a gaming website, it’s safe to say you do. OK, the last one. Do you like puzzles games? Now you are thinking, “What is this? Is this some kind of survey? ” Well, let me explain. If all your answers are “yes” (the last one is a little bit personal, but hear me out), Visai Studios is cooking a game for your taste! It is called “Venba.“

Venba is a cooking game in which you play as an Indian immigrant mom named Venba. You will be cooking, having conversations with your family, and finding out the old recipes. The game is story-driven, and every food you cook and every recipe you unsolve will have a meaning to the plot.

For instance, Venba’s designer and programmer Abhi said, “I think food lends itself to gameplay mechanics really well. So when I thought about the way it was going to carry the story, food automatically made sense.” He also states that “the story itself features a mother who is trying to bridge the gap with her son. And she’s trying to put all these unsaid words and emotions into the cooking. To me, it felt like food was the best way.” So even though it’s a cooking-based game, it revolves around love, family, and more. Let’s get a taste of the gameplay.

From what we know about the gameplay, you will have a recipe book that will help you cook things that rhyme well. But here is the catch: Some of the words in the book are missing. You have the ingredients and tools to cook the meal, but, as you might have guessed, the order is the key. Besides this, the recipe book isn’t very precise. It has measurements like “mixing until the dough is sticky” or “a finger of butter.” Because this book was written by Venba’s great-great and many more great-grandparents, the understanding of a recipe wasn’t that apparent.

With puzzles and an immersive story, the game has beautiful graphics and cute animations that keep a warm and authentic environment.

Overall, Venba is a story-driven, cooking-based game with puzzles unlike any other. We are hoping to hear more about the game in the upcoming days. Until then, check out the PC requirements to make sure you are ready to cook with Venba:

The game will be coming out on Steam. So don’t forget to add it to your wishlist!