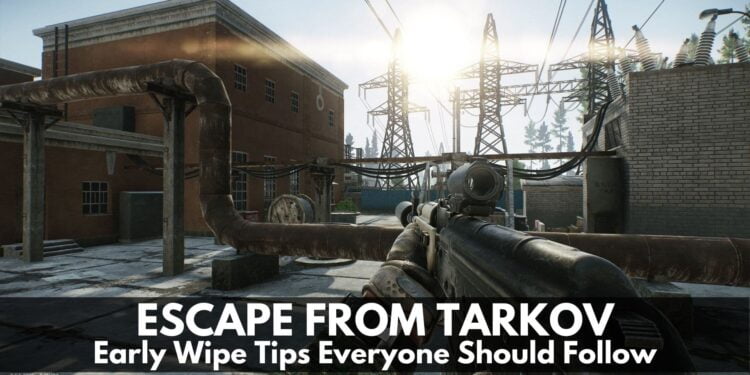 Early wipes in Escape from Tarkov are an exciting challenge for players. Every couple of months, all progress on every server gets completely reset, and players have to start over again from scratch.

But with the wipe come new maps, weapons, equipment, and a restructured balance across the game board, giving players plenty of chances to acquire better loot and enjoy a different playstyle.

This mechanic forces players to constantly pursue upgrades, including weapons, armor, and even special bonuses earned through quests or rewards. The feeling of starting over and becoming more robust than last time adds an intensified thrill that makes this game so rewarding.

Tips To Follow In Escape From Tarkov Early Wipe

The early wipe in Escape from Tarkov is essential to the game. It marks the end of a season where all players have to start over with a new character.

This can be difficult for those who need more preparation, so here are some tips everyone should follow when facing an early wipe.

During an early wipe, you must prioritize your gear. Make sure to equip yourself with items that will give you the most protection or utility, such as body armor, helmets, backpacks, weapons, and ammunition.

Having these items ready before a raid will give you a much better chance of survival during an early wipe situation.

Another critical tip for surviving an early wipe is to plan and adapt quickly. Think about what strategies you can use to maximize your chances of success – whether it’s finding cover or using certain weapons. And then make sure you’re prepared for any potential changes in the environment or enemy tactics during the raid.

Lastly, stay flexible; if something goes wrong during a raid, don’t panic – instead, be willing to adjust your strategy on the fly to adapt and survive!

Stock Up On Supplies Before You Begin

One of the most important things you can do before starting an early wipe is to stock up on supplies. Make sure you grab as much ammo, armor, weapons, and medical supplies as possible before launching into your raid.

A well-stocked loadout will ensure you have everything you need to stay alive during your raid. It’s also essential to make sure that your inventory is organized so that you can quickly access items when required.

Know Your Maps And Enemies

Knowing your maps and enemies will give you an advantage during your raids. Take some time before starting each attack to familiarize yourself with the environment and any potential threats or hazards.

Understanding where enemies spawn, what loot they drop, what type of AI they use, and any other relevant information will help prepare you for the raid ahead.

Additionally, it is essential to note how terrain affects enemy behavior – understanding this will give you an edge when engaging in combat with them.

Utilize The Cover System To Your Advantage

In Escape From Tarkov, a cover system allows players to remain hidden while moving around maps without being detected by enemies or security cameras.

Utilizing this system will allow players to sneak past enemy lines without being spotted or alerting them of their presence – this can be extremely useful when trying to avoid detection or move stealthily through a map quickly.

Additionally, taking cover behind walls or objects may provide additional protection from incoming fire if necessary.

Start Small & Build Up Your Gear

The first thing you should do after a wipe is to start small and build up your gear slowly. Don’t try to take on too much at once. Instead, stick to low-level maps where you can get used to the new equipment without worrying about getting wiped out by more experienced players.

When you’re ready to move up in difficulty level, upgrade your gear to match what seasoned players will use on higher-level maps.

Wiping in Escape From Tarkov can be a frustrating experience, especially if you need more preparation. But with the right strategy and knowledge, you can go unscathed to the other side.

And also, you should know about undetected Escape from Tarkov hacks to perform well after the wipe.

By following these early wipe tips, you’ll be on your way to becoming a seasoned veteran in no time. So don’t wait – get out there and start exploring!