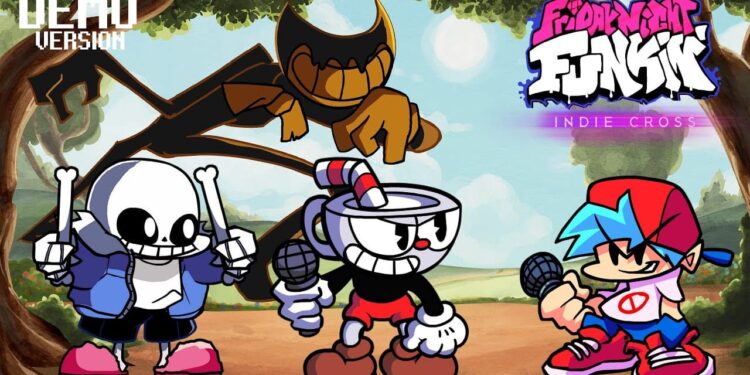 As the name might ring a bell in your head, we’ll see some characters including Cuphead, Sans, Ink Bendy from different games in the Friday Night Funkin vs. Indie Cross Mod.

Let’s see closer each character that the Boyfriend will face. First, the BF will have a reap battle against Cuphead, the main hero of the platform game created by the Studio MDHR. We have plenty of articles about Cuphead, so you can learn everything about Cuphead in JixPlay.

After BF managed to beat, the Boyfriend will face an undertale character named Sans who is a paunchy skeleton with a wide toothy grin, glove-like hands, and large eye sockets.

It’s hard but if the BF achieves to beat Sans the Skeleton, he comes to the final stage to have a rap battle with Ink Bendy who is the main antagonist of the Bendy Franchise created by Joey Drew Studios Inc.

FNF vs. Indie Cross Mod online is now finally launched on the internet. As we mentioned above, this FNF Mod comes with three brand new characters and their three songs as follow:

You can now play the Friday Night Funkin vs. Indie Cross Mod online on your browser from the link below.

To download this amazing FNF Mod, visit the official page of the Indie Cross Mod on GameJolt. If you want to download the multiplayer version, you should visit GameBanana.