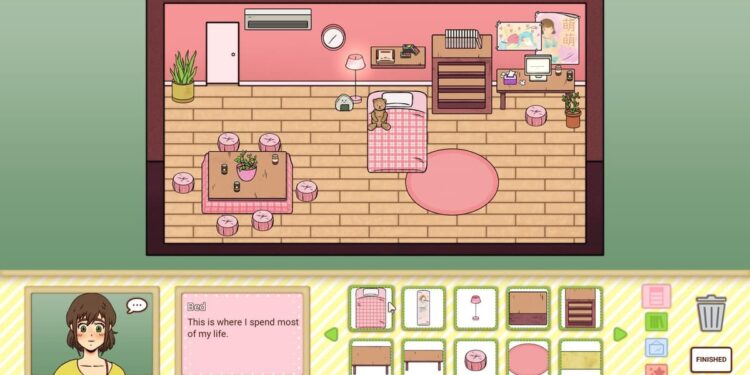 Yamasen-Chan, the main character you’ll help, has severe social anxiety and you need to design rooms for her own place, and different places the game takes you such as an RV, cave, and the void. The game can have a bad or good ending. In the good endings, she cures her social anxiety and lives happily whereas, in the bad ending, she ends it all.

The purpose of the game is to make sure she doesn’t end it and cures her social anxiety. You start off designing homes for her in her own living space. After her family cuts her allowance and stops paying her rent, you get to a different place and the chain events of moving to different places go from there.

What you need to do is design homes for her according to what she says. The events going after her own living space will determine whether it will end in a good or bad ending.

Unfortunately, Hermit Home Designer isn’t available on macOS. But, you can still play it on your MacBook or iMac if you have Windows 10 installed on the device. You can get to running Windows 10 games and tools using a virtual machine (VM).