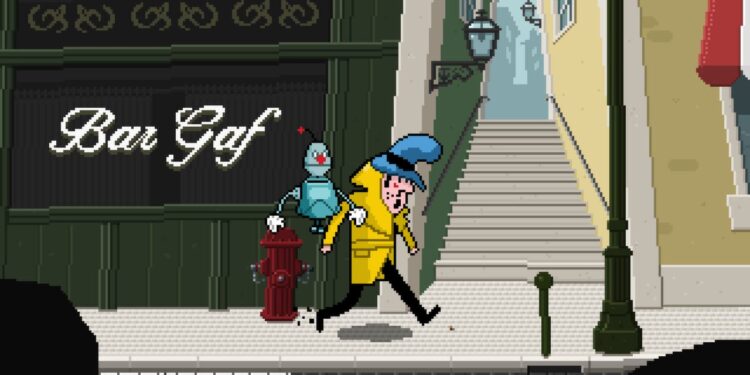 Being a detective is a serious business. Solving deep mysteries, having sleepless nights, and (at least in most movies and video games) a lonely life. But Nerd Monkeys has a different approach. A detective with a funny hat (but don’t tell him that, that’s a bit rude) and a (un) funny robot. Yes, we know, it sounds weird, but hear us out. Today we are reviewing a game about a serious case with unserious detectives named “Detective Case and Clown Bot in: Murder in the Hotel Lisbon.”

“Detective Case and Clown Bot in: Murder in the Hotel Lisbon” is a point-and-click adventure game with old-fashioned cartoonish pixel graphics. The game was developed and published by Nerd Monkeys and was released on July 17, 2014. They also have a sequel game, Detective Case and Clown Bot in: The Express Killer, released in 2018. Murder in The Hotel Lisbon has a decent storyline with a lot of sarcasm and jokes in many conversations. Now, you are asking, what is the plotline and how do a detective and a clown-looking robot work together? Let’s figure it out!

Murder in The Hotel Lisbon Gameplay

A murder occurs in the Hotel Lisbon, a committed suicide. But when Policeman Garcia looks at the case, he sees many contradictions and hires the best detective in the area to solve this case. A detective with a beautiful hat and a joker robot. The detective he is going to hire needs to solve this mess by interrogating witnesses with the matching evidence, making bad jokes with the clown-bot (which is very good at it), and having fun!

Murder in the Hotel Lisbon is a point-and-click game, so we will be clicking a lot. The environment isn’t very friendly, and everything blends in like in real life.

Fortunately, things we can interact with have a white background, so it’s not that painful to find evidence. Another good part is that, even if we fail, we can restart the interrogation. It is also the bad part because we will need to click on everything once again.

We have two choices: Detective Case, which is very original, or Clown Bot, who wishes to be a clown in a circus one day. The character we choose will be important in interrogation in several ways. But we will let you figure that out yourself. The game has side missions as well. You will be able to play three additional cases. Last but not least, the game’s original soundtrack really puts you in the mood.

Murder in the Hotel Lisbon is a well-made game with pretty 90s graphics and hilarious jokes. For all the indie adventure fans, we recommend playing this game. The game is on Steam at a price tag of $5,99. You can play it on the Nintendo Switch, Microsoft Windows, Linux, and macOS. The game only has an English and Portuguese interface, so keep that in mind. The game isn’t very demanding in system requirements, but just to be sure: