by Miss Clayda
in Guides 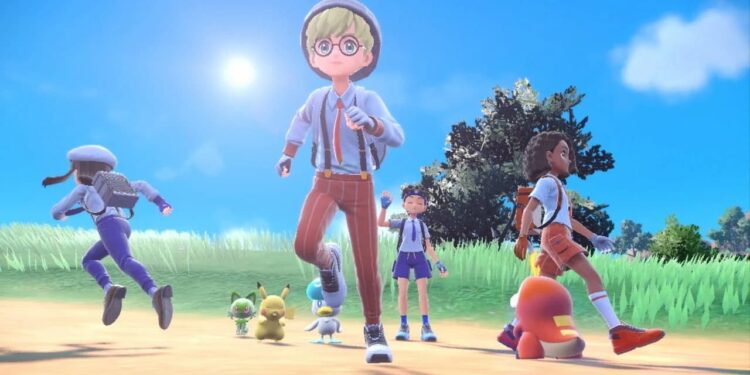 Whether you have played Pokemon Scarlet and Violet before or this is your first time, you’ll want to take some time to read through this beginner’s guide to find out the basics of this great game. There are many different topics covered here, including the Starter Pokemon, Professors, Icons on the map, food boosts, and co-op play.

Designed for newcomers, the Pokemon Scarlet and Violet beginner’s guide includes useful tips to help you get started. It also includes a look at the game’s new features and things to do in the early stages.

Pokemon games are set in a big open world. The main goal is to find the legendary Pokemon Titans and become a Pokemon champion. This is done by catching Pokemon, and defeating Team Star. It is also known for its great catch system and easy-to-follow main map.

The different questlines in Pokemon games are meant to keep players interested throughout the game. The best way to level up is to catch Pokemon that are a little bit above your level. In Scarlet and Violet, players have the option to level up using power items. This allows Pokemon stats to increase faster.

The Pokedex is the central hub of every Pokemon game. It is where players spend a lot of time, and you can read text entries as well as check on the habitats listed on the map.

Pokemon games feature auto-battling, which is a quick way to fight opponents. However, it comes at a cost. You will not gain XP as quickly from auto-battles as you would if you were fighting another player.

There is a new feature in Pokemon Scarlet and Violet called ‘Picnics’. This is a nifty way to increase your odds of catching specific Pokemon, and spawning more eggs. You can make these picnics anywhere on the map. You need to have ingredients, and the Pokemon you want to catch.

Traditionally, Professors have only been in one generation of Pokemon games, but that is about to change. Now, players can expect to meet at least two new Professors. These Professors may be the reason for some of the fun and exciting interactions in the game.

The first Professor you will meet in Pokemon Scarlet and Violet is Professor Sada. This guy is a Pokemon expert, and he specializes in research in the Paldea region. He wears a leather outfit similar to the legendary Scarlet Koraidon. He wears bone jewelry and sports a sexy hairdo.

The Pokemon Scarlet and Violet beginner’s guide would be missing something if it didn’t explain briefly how time travel works in the game. This mechanic allows players to travel to the past or the future.

This is one of the most exciting features of the Pokemon game. While it will require trading to complete the PokeDex, it will also give players the opportunity to take part in a variety of other fun scenarios. It will also allow players to interact with AI hosts who are tasked with preserving the memories of Professors.

This game has plenty to offer, especially if you are new to the series. It is also fun for old fans. While the gameplay may seem complicated at first, the Pokemon game’s mechanics are simple enough that new players can get into the swing of things.

Icons on the map

Whether you are playing Pokemon Scarlet and Violet for the first time or are a seasoned veteran, it is important to know how to navigate the map and find the icons you are looking for. These icons are helpful in determining whether or not a location is fair to visit. There are many types of icons on the map, and new players may have trouble navigating through the many different signs.

There are also icons that indicate the locations of food stores. These stores can help you boost the stats of your Pokemon. These stores also carry ingredients.

Throughout the history of gaming, food has been used as in-game items. The concept of using food to get temporary boosts has been around for a while, and has even appeared in recent games like Xenoblade Chronicles 3 and Pokemon Sword and Shield.

The newest addition to the Pokemon family, Pokemon Scarlet and Pokemon Violet, introduces a new food-related mechanic. Known as “meal powers”, these are buffs that are gained by eating certain foods. You can check the health of your meal powers by pressing the right button on your D-Pad. Meal Powers last for 30 minutes after they are activated.

The best way to use sandwiches to your advantage is to learn what types of foods grant what types of meal powers. You can use these buffs to improve your Pokemon’s experience, or to boost your chance of catching a specific type of Pokemon.

The best sandwich recipes for Pokemon Scarlet and Violet will be dependent on the type of Pokemon you are trying to catch. For example, if you want to improve your fire type Pokemon’s catch rate, try using a sandwich made of chorizo. If you are looking to improve your chances of catching a shiny Pokemon, try making a sandwich stuffed with a variety of scrumptious ingredients.

There are many food-related mechanics in Pokemon Scarlet and Violet. Unlike most games, you can’t just walk up to a random Pokemon in the wild and hope it will eat your sandwich. You need to approach the right Pokemon in order to snag it.

Whether you are a new player or an experienced Pokemon fan, Battle with trainers is a core element of any Pokemon game. These are the battles where you have to fight other trainers to progress through the game.

In Pokemon Scarlet and Violet, you have three main quest lines. The first involves an experienced Pokemon trainer named Nemona. Her goal is to unlock a box legendary mount. This includes a series of quests, such as using legendary Herba Mystica food ingredients to power up a Pokemon. The second involves Titan Pokemon, which are large Pokemon that allow you to use new skills when riding them. The third involves unlocking the skills of rideable Legendary Pokemon.

Taking on more battles with trainers is another way to boost your party. When you defeat a certain number of trainers, you will unlock rewards. TMs can also be earned for completing Trainer Challenges and defeating Gym Leaders. You can also gain League Points to craft unlimited TMs.

Unlike previous Pokemon titles, Scarlet and Violet will allow players to interact with other players and explore the world together. The system will allow for up to four players to co-op play through a series of open-world areas.

The co-op features include the new Union Circle. Union Circle is a place in the game where players can communicate with each other, explore new areas, and battle wild Pokemon. In addition, players can also trade their Pokemon with other trainers.

The co-op system will also allow players to catch Pokemon together. However, it’s unclear how discrete these events are. One possible example is that players could catch a pocket monster in an open field, while another player may be able to trade it for another Pokemon.

The co-op system in Scarlet and Violet will also allow players to catch Pokemon together. This will allow for a fun picnic in an open world. The game will also allow for up to four players to play together, and players will be able to run through different corners of the map.

In Other Waters Review