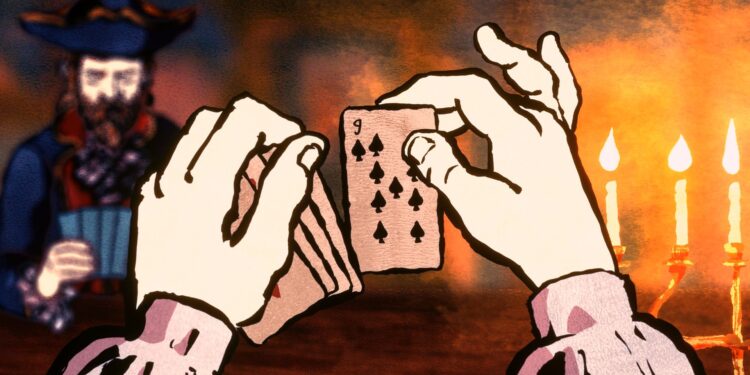 As the name suggests, Card Shark is a card game, but it is definitely not one of the card games you used to play. We can say that it is a card trick game where you try to cheat your way to the top of 18th-century French society. Card Shark is being developed by Nerial and published by Devolver Digital. It also has a demo on Steam. So, we find it worth taking a look at.

Card Shark is an adventure game that offers you cunning, intrigue, and delectable deceit. The game is still in the development phase, but it has a solid demo. The developer of the game, Nerial Studios, is a United Kingdom-based video game studio, and it was acquired by Devolver Digital in 2021. Even though they are a small group of developers, they have created great games like Orwell’s Animal Farm and Reigns: Beyond for PC and mobile platforms.

Let’s talk about the Card Shark. The game takes place in the 18th century in France. As we mention, it seems like a card game, but it is different from card games. The developers define what awaits you in this game with these words: You’ll enter a world where you’ll need to play your opponents better than you play your cards.

You must find a way to get to the top of 18th-century French society. And this road is through cards. You have to master card games, card marking, false shuffles, deck swapping, misunderstandings, and more. In short, you must be a master trickster!

In short, if you want to try unique card games and learn some magic tricks, you should definitely add Card Shark to your wishlist. The environment the game offers and the gameplay experience the game offers are unique. The game will be released later this year and be available on Steam and the Nintendo Store.