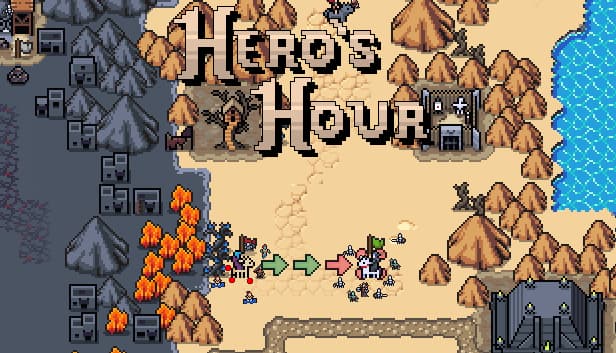 Hero’s Hour is an indie RPG developed by Benjamin “ThingOnItsOwn” Hauer. If you like to play fast-turn-based strategy RPGs, then you may want to check out this article. Cause we covered one of the best video games in this genre under the Hero’s Hour Overview headline. If you’d like the game, you can find download links under Where to play Hero’s Hour headline, and of course Hero’s Hour System Requirements.

Hero’s Hour is a fast-turn-based strategy game that features real-time combats. Even though the game is not fully released yet, you can play its demo version of the game for free. Or you can just watch the Hero’s Hour gameplay video below.

If you are a strategy game addict, you will see the game inspired by the famous strategy title Heroes of Might and Magic III. Just like in the HoMM, you’ll control recruit armies, explore the map (to get resources), and expand your army.

Well, what does the game offer you? Actually, it offers really great stuff. Here are some examples:

Where to play Hero’s Hour?

You may don’t want to pay a penny to the unfinished game. Thus the developer offers a free demo of the game on the same site.

If you are one of those who don’t play a game placed on platforms other than Steam, you can add the game to your wishlist and wait for the release date of the game.

Hero’s Hour is only available for Windows PCs. To be able to play the game, your PC at least meet the following system requirements:

Playing video games should be smooth, right? To be able to play the game smoothly, developers recommend the following system requirements: