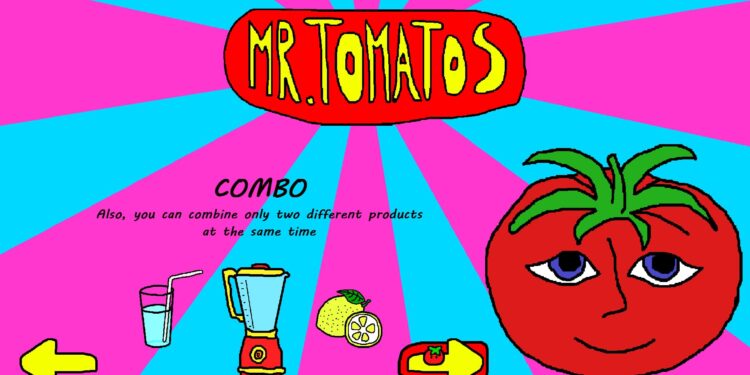 Are you ready to meet a really strange indie game? We’ll introduce Mr. Tomatos, which is a pretty interesting indie game released at the beginning of December 2021. If you are looking for a game to play in a short time, this game might be a great option for you. In this article, you’ll find everything may want to know about this game. Besides, you can learn who Mr. Tomatos is and where you can play Mr. Tomatos?

Mr. Tomatos is a management-based indie game developed by Oxtord and released on December 3, 2021. In this game, you’ll assist and feed the tomato guy named Mr. Tomato. Mr. Tomatoes looks as if he hasn’t eaten in years, and it’s time for him to curb his appetite. Of course, you can’t offer him food directly. You’ll need to mix things up, process the food, and feed him. Despite his hunger, he doesn’t sacrifice his sense of taste.

You should avoid making Mr. Tomato furious, or you will lose the game. In addition, every time you do anything that the tomato guy likes, you will gain points. You can use these points to purchase additional food and equipment at the store. This will assist you in making faster progress and completing the game.

Who is Mr. Tomatos?

Obviously, Mr. Tomatos is the main antagonist of the game. He is an anthropomorphic tomato, and he loves eating. Due to he has no hands, you should have to feed him according to his taste. As long as you give him the right foods, everything is ok. But if you give him the wrong food, he gets angry, and after all, he can steal your soul.

Where can you play Mr. Tomatos?

Mr. Tomatos is now available on itch.io for free, but if you like the game, you can get the Mr. Tomatos++ by paying only $5 to reach more features. The bad thing about the game is you can only play it on Windows PCs. So, if you have a macOS or Linux-operated PC, you can’t play the game on your device.