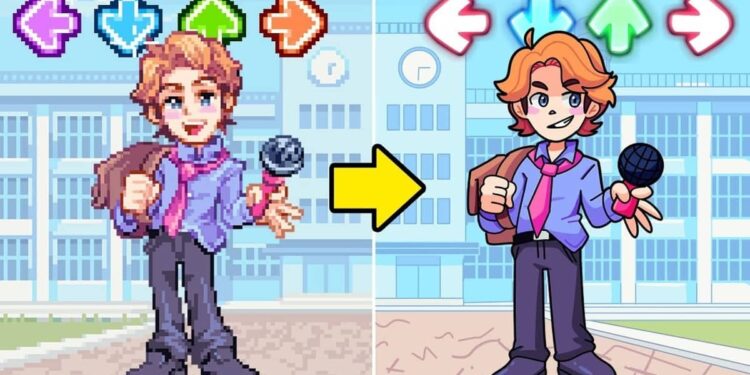 The true senpai of the Boyfriend in Friday Night Funkin is undoubtedly the Daddy Dearest but the Senpai mod FNF replaces with another master to be taken down. Wearing a blue shirt and pinkish tie, Senpai is there to take you down as he is the master of rap battles that the Boyfriend is getting into. Will you prove Senpai wrong that you have what it takes to be the champion?

Senpai has three stages to him: Normal as usual, Angry, and Spirit. The mod is also known as the Spirit mod other than Senpai mod FNF. During some of the songs, the volume gets especially louder so you might want to have some headphones on to not disturb others in your household.

Play Senpai mod FNF on your browser – no download

The ability to play FNF mods online through the browser is perhaps one of the best features of the game. The community is pumpin’ up, bringing mods after mods and it makes our job hard to select which ones to feature. Senpai mod FNF, when taken a look at in detail, is one of the best mods that offers plenty of fun times. It’s also a great mod to practice your speed if you’re struggling with playing harder game mods like the Whitty and Shaggy.

Above, you can play the Senpai mod online without hesitation but some players prefer playing the game mods – and any other game – on their computer, locally. That’s understandable and at JixpLay, we’re here to deliver. Download Senpai mod FNF, but consider playing the game with no download.

The mod isn’t especially large but on the heavier side. There are plenty of other FNF mods that take up less space. In comparison to those though, Senpai mod FNF is more contentful and packed with more throughout the mod.