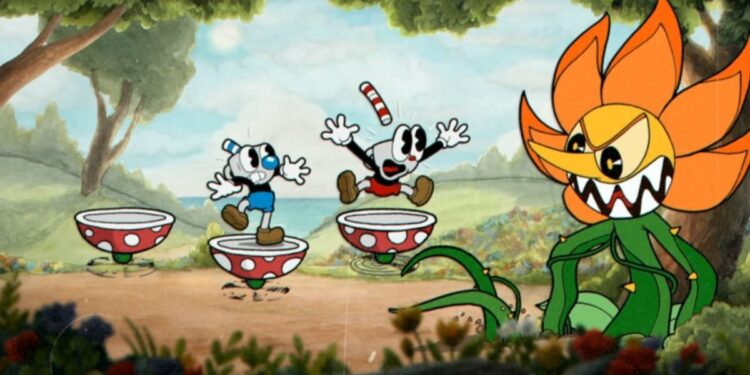 Cuphead is a fun game where you will possibly have a love and hate cycle of the game. It’s one of the best run and gun titles that came out in recent years. Here is where you can download it for all the platforms it’s available at the moment.

For the time being, Cuphead is available on PC, macOS, PlayStation, Xbox, and Nintendo Switch. In this article, we will show where to download Cuphead, provide a brief overview of the compatibility with the platform, and tell you our take on where it’s played the best.

Cuphead was first released on PC along with Xbox One and Xbox Play Anywhere on September 29, 2017. Since then, Cuphead has become a very attractive choice for pc gamers who are into indie multiplayer games. You can download Cuphead for PC on Steam and Microsoft Store. Regardless of where you buy it, Cuphead costs $19.99 for PC.

macOS owners don’t get that many games to play but among the handful of games playable on Macbooks and iMacs, Cuphead is a great choice for many. If you’re looking for a fun and quick videogame to play on your macOS device, Cuphead is a good pick to pass some quality hours.

Cuphead on Steam for macOS

Cuphead is best to be played on consoles. Whether you’ve upgraded your PlayStation to PS5 or not, you can get Cuphead for both PS4 and PS5. Ever since it first came out, PS4 players played thousands of hours of Cuphead. Get Cuphead for PS4 and PS5 for $19.99.

Cuphead for Xbox One – X Series

The same as PlayStation, the playability on Xbox consoles are the same so is the price but Cuphead on Xbox isn’t on sale at the moment. Although the game doesn’t support 4K at 120 fps yet, with the release of the new DLC, we expect Studio MDHR to bring a new take to the visuals of the game. Cuphead is definitely the most fun on consoles as you can play with a friend on the couch – smashing monsters and defeating bosses.

If you have a Switch, Cuphead will be one of the most fun games you will ever play on the Switch. It’s more fun than most other Switch games as the playstyle of Cuphead fits the Nintendo Switch‘s controls perfectly.

Even though the FPS may not be as high as on other devices, it’s still a great way to experience – added with the mobility Nintendo Switch offers, Cupghead has never been this fun. The cost of Cuphead on Nintendo is $19.99, but we expect it to go on sale in the upcoming months.